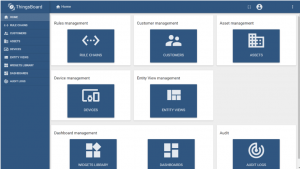 Our client wanted to build a gas detection system in multistoried buildings. He wanted to be able to track the leakage of gas if any, to the floor of occurrence.

We built a gas detection system consisting of micro-controller units (MCU), gas detection sensors, RF modules, a web application, and a mobile application. The hardware combination of the MCU, gas sensors and the RF modules were considered end nodes/repeaters. They were deployed on every floor of the buildings.

The data collected from each end node/repeater was transmitted via Radio Frequency and then pushed to ThingsBoard IoT Platform. Thingsboard.io was finalized as the web platform and we had setup the platform with Cassandra as the backend. The hardware firmware was modified to publish the data to a MQTT topic. The backend system processed the message from the topic and performs the data ingestion.

Once the data is available in the database, the web visualization is achieved using thingsboard.io. Current values, historical values based on date time range, alert listing, email notifications, maps views are some of the visualization that was implemented on the gas detection platform. Custom Application Programming Interface (API) was created for data exchange between mobile platform. A hybrid mobile application was developed to provide with the device monitoring feature for the technicians. The mobile app had a feature to view the current data, historical data and list of alerts that is generated by the sensor device.